The major feature of the new 2.10 release of the GLG toolkit is a cross-platform support for the OpenGL renderer, which provides all GLG applications with an access to anti-aliased hardware-accelerated graphics, transparency, alpha-blending and other OpenGL rendering features. The OpenGL support is completely transparent to the application and does not introduce any dependencies on OpenGL libraries. At run time, the same application executable may select an OpenGL or native X/GDI renderer.

An OpenGL driver has been added for both Windows and Unix/Linux versions of the Toolkit.

The new features of the OpenGL renderer include:


By using double values in its rendering pipeline, the OpenGL renderer also takes care of the wrap-around problem that happened in the native GDI driver under high zoom factors due to the coordinate values overflow.

Existing GLG applications can benefit from OpenGL hardware acceleration by simply rebuilding them with the GLG libraries from the new release, with no source code changes required. The OpenGL libraries are loaded by the Toolkit dynamically if they are available on the system, which avoids OpenGL dependencies in the applications.

At run-time, the Toolkit auto-detects the presence of the OpenGL driver on the system and uses the OpenGL renderer if possible. If the system does not support OpenGL, the conventional windowing system driver is used. The OpenGL renderer may be disabled or enabled at run time as required, and the same executable may be run in either OpenGL or native GDI rendering mode.

New object dimming and highlighting features may be used to increase or decrease the brightness of all object colors. It provides a convenient way to implement a visual feedback for object activation or deactivation. Negative values of the Visibility attribute activate this feature. 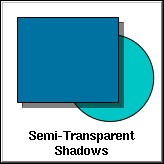 CustomDraw callback has been added to enable direct rendering of graphical primitives without the object overhead.

Paste Clone Type Builder option has been added for finer control of attribute constraints during the Paste operation.

Qt4, GTK and GTKMM integration files are now included in the release.

Process Control widgets have been updated with the gradient rendering and timer animations.

New dial and meter widgets have been added to the Controls widget set.